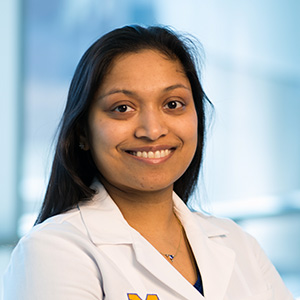 This new professorship honors Dr. Opipari, a pediatric oncologist-hematologist and the first woman chair of Michigan Medicine’s Department of Pediatrics, a post she held from 2003-2018.  As a physician-researcher, Dr. Opipari also is a founding scholar of the Taubman Institute.

The professorship, approved by University of Michigan regents, was endowed by the Shirley K. Schlafer Foundation, which is directed by longtime U-M benefactor Edith S. Briskin.  Among other gifts to the university, Mrs. Briskin was instrumental in the development of the Taubman Emerging Scholars Program, established in 2011 by the Taubman Institute, and has provided past funding for several early-career physician-investigators, including Dr. Singer.

Promoting the advancement of women in medicine, as well as advocating for better health care outcomes for children, has been the focus of Mrs. Briskin’s philanthropy.

“It was when I met Valerie Castle Opipari that I began to see a path to promote meaningful change by finding a balance of gender equity in leadership and building one where equality is the rule, rather than exception,” said Mrs. Briskin in a letter accompanying her gift to endow the professorship.  “It continues to be my philanthropic passion.”

Dr. Singer is the previous recipient of funding from Mrs. Briskin via the Taubman Institute’s Emerging Scholars grants, which connect donors with promising physician-researchers in fields of interest to the donors.

“Receiving a professorship itself is such an honor for a faculty member, but this personally means so much more because of the relationship I have developed with Edie and her vision for commemorating Dr. Opipari’s leadership in Pediatrics,” said Dr. Singer.  “Dr. Opipari has served as a role model for me since I was a trainee and as I developed my career as a physician- scientist. This professorship also more specifically honors and supports the advancement of women in academic medicine. These are values that I hold dearly, making this such an amazing honor.”

Dr. Singer’s research focuses on understanding the impact and implications of diet induced obesity on the immune system. Chronic inflammation has been linked to the metabolic and cardiovascular complications of obesity and understanding the mechanisms of this and the life-long impact on health are critical goals for the Singer Lab. Dr. Singer’s laboratory has specifically worked to understand sex-differences in these immune responses and the role of sex hormones in altering risk for metabolic disease.