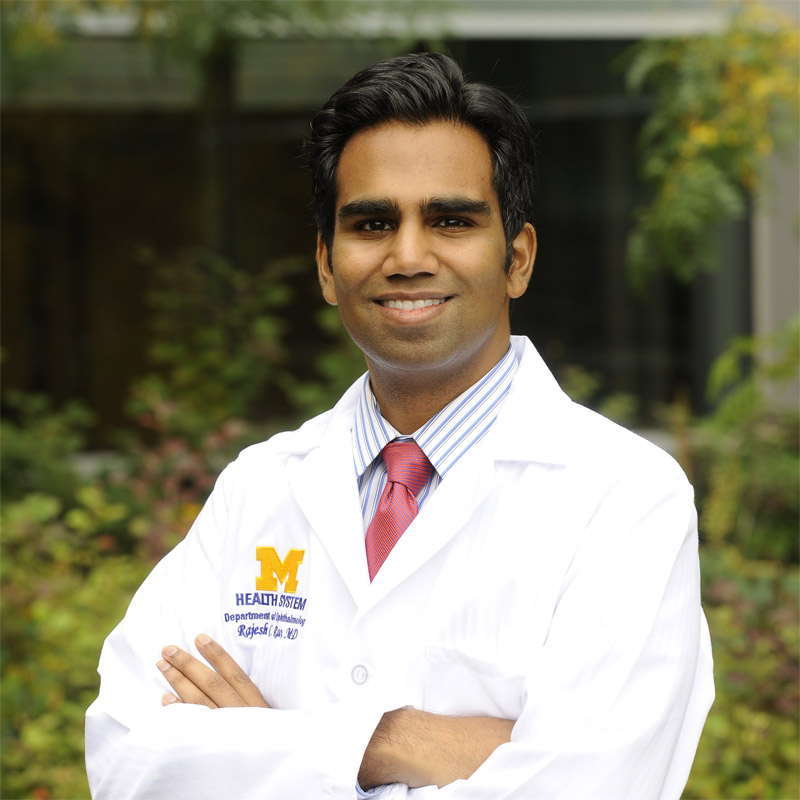 How do a couple of universally expressed proteins in stem cells and developing embryos influence an individual cell’s ultimate fate — whether it ultimately becomes, for example, a retinal cell, a heart muscle cell, or a stomach lining cell?

That’s the question that Rajesh C. Rao, M.D., and his colleagues at the University of Michigan set out to answer.

Their findings, published in Cell Reports, could lead to new tools for researchers studying different types of specialized cells — for which U-M was awarded provisional patents.

The research may also help illuminate an emerging class of anti-cancer drugs, WDR5 inhibitors — as the two proteins at the heart of the study, WDR5 and p53, have long been studied in relation to cancer, and the study sheds light on how WDR5 regulates p53, both directly and indirectly.

“Most scientists have worked to understand stem cell differentiation by looking at transcription factors and how they jump into the action at a very specific time and place,” says Rao, an assistant professor of ophthalmology and pathology at Michigan Medicine, and the study’s senior author.

“Our main interest is in epigenetics and how changes in chromatin — the packaging of DNA with proteins known as histones — affect the fate of stem cells,” adds Rao, who is also the Leonard G. Miller Professor of Ophthalmology & Visual Sciences. “How does a ubiquitous transcription factor like p53 integrate time-sensitive inputs from WDR5, which is involved in chromatin modifications, to guide differentiation?”

And while the detailed answer to that question is primarily of interest to other scientists, what the team observed in the lab is striking.

Normally these cells would develop into proto-nervous system tissue — called the neuroectoderm — which eventually gives rise to brain, spinal cord and retinal cells. (Rao studies the epigenetic regulation of retinal development and disease.) But the scientists’ timing change of expression of the WDR5 gene steered them toward the mesoderm, which gives rise to blood cells, heart muscle cells and skeletal muscle cells.

“When we looked through the microscope, we could see the cells beating. It was a total surprise,” says Rao, who is also a member of the U-M Rogel Cancer Center and director of retina service at the VA Ann Arbor Healthcare System. “We cut them open and stained for proteins that are expressed in heart muscle cells, and found that 30-40% of the cells within the organoid had them. And that was enough for them to beat.”

Typically, researchers have to use more complex and expensive methods to generate heart-like cells from embryonic stem cells — which led the team to seek patents on generating these “organoids,” Rao explains.

More broadly, while p53 has been extensively studied in the context of cancer, the research fills in new details about the transcription factor’s role in the fate of non-cancerous embryonic cells, he adds.

“The method we used is not the way these different cell types are actually created in nature since WDR5 is not ‘naturally’ turned off temporarily in the embryo,” Rao says. “But we were trying to find out the effects of this important epigenetic player, WDR5, on differentiation that couldn’t be studied before — because if you turn it off entirely, the cells just die. So we had to devise a method to turn it off temporarily.”

Meanwhile, approaches to inhibiting WDR5 to treat cancer is the focus of $1 billion in pharmaceutical industry investment, Rao and his colleagues note, and the research could inform the investigations of off-target effects of these new potential anti-cancer drugs.

Disclosure: Portions of the research were used as the basis for provisional U.S. and international patent applications.

New findings about the immune systems of patients with lupus
May 16, 2022